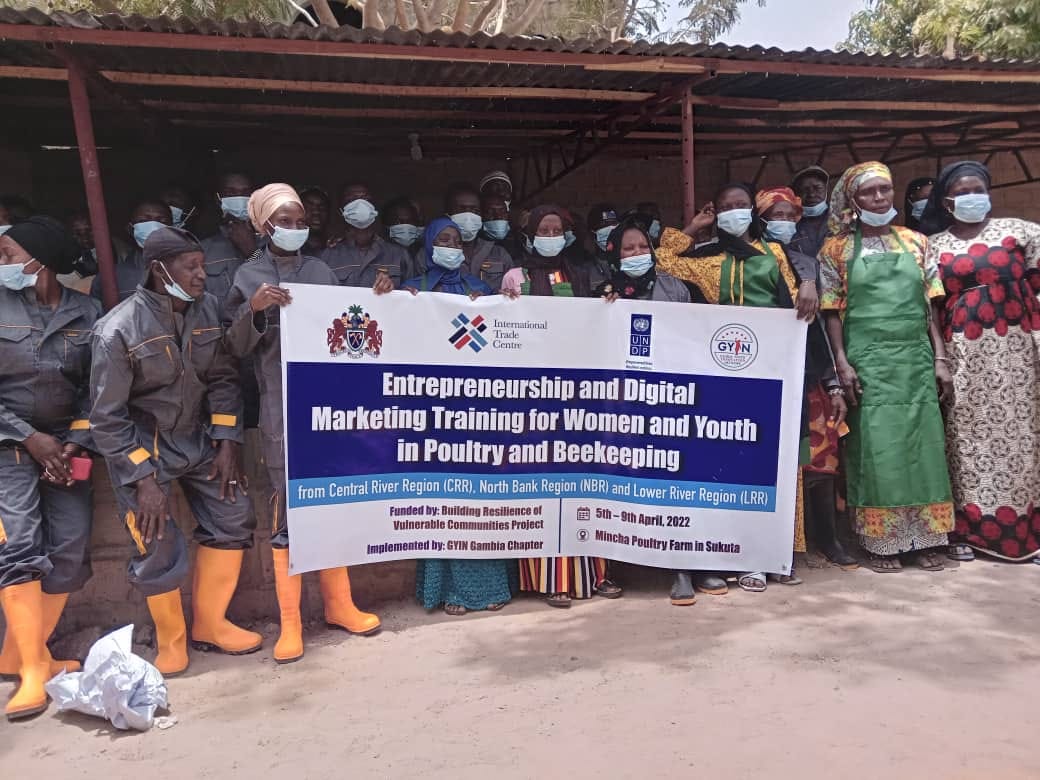 The Gambian chapter of a youth network called Global Youth Innovation Network (GYIN), and its partner in youth development-International Trade Centre (ITC), on Friday, 8th April 2022 graduated 40 women and youth entrepreneurs, after a forty- five (45) days of training in poultry and beekeeping.

The youth poulterers and apiculturists, drawn from the Central River Region (CRR), North Bank Region (NBR), and Lower Region (LRR), are engaging in beekeeping and poultry businesses in their respective regions.

Held at Mincha Poultry Farm in Sukuta, Kombo North of West Coast Region (WCR), the Practical and theory training on Entrepreneurship and Digital Marketing, was funded by ‘Building Resilience of Vulnerable Communities Project (UNDP)’ and implemented by GYIN Gambia.

In his remarks at the ceremony, the head of GYIN Gambia acknowledged that all the stakeholders to this project have done their part, and he enjoined the trained entrepreneurs to make the best use of the knowledge and skills gained in poultry management and production.

GYIN Gambia Founder Njie said this was the first training of its kind in the country, adding he was thrilled because such training would usually last for two or three days, but that particular training lasted for “45 days” where trainees were taken through all the stages of poultry production and management by seasoned Gambian poultry business proprietors like Samba Bah of ‘Samba and Sons Poultry Enterprise’,  who had been in the business for 25 years; and Lalo Minteh of the Minteh Poultry Farm.

While saying the ITC has funded numerous projects since 2017, Njie, however, maintained this communities’ resilience project is “a prominent and outstanding one” because trainees went through rigorous capacity building from end to end in poultry production and management. “You should take ownership of your businesses,” the GYIN Gambia Chapter chief urged.

Mr. Yusupha Keita of the ITC told his audience the project was realized from a UNDP survey on the implications caused by Covid-19 and poultry was identified by certain villages.  He explained that Jobs, Skills, and Finance (JSF) project came into the program through the improvement of the curriculum on skills training which was approved by the National Accreditation and Quality Assurance Authority (NAQAA). He indicated that it’s easy to do poultry and make profits from it, and contribute to mitigating the effects of climate change.

Overall, 65 participants are involved in this project, and Keita advised the trainees to take ownership of their businesses so that they would benefit from them as well as their respective communities too.

“I was impressed that some of you have already built your chicken houses,” the ITC official told them. He disclosed the trainees would also go through the packaging process training in their respective regions, in the future.

Meanwhile, Mr. Samba Bah, Proprietor of ‘Samba and Sons Poultry Enterprise’ in Kubariko village, revealed the participants were exposed to the secrets that the trainers are using in poultry management and production.

Mr. Lalo Minteh of Mincha Poultry Farm noted the trainees were lucky to go through that training because 1,000 broodings were without casualties, and they have met all the needed targets of the training.

He said Gambians usually don’t believe in their products and services, but stressed the trainees proved them wrong because all the feeding products for birds were locally produced in The Gambia. He advised trainees to network amongst themselves to continue learning, and that they should stay put with their profession.

The participants who spoke at the event hailed the quality of the training that they had undergone and acknowledged their commitments to the cause of poultry production and management in their respective communities.

Areas covered during the training, this medium gathered, are: Understanding the realities of starting and running a business; Skills to develop a concrete business canvas; Small business management techniques; and Digital marketing to enhance sales and venture competitiveness.