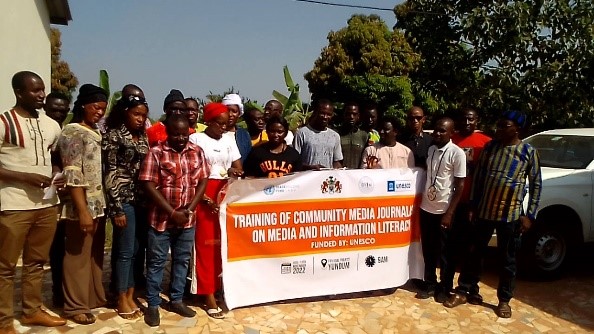 The Global Youth Innovation Network- Gambia Chapter dubbed GYIN Gambia has in partnership with UNESCO Dakar, through the UN Peace Building Fund, commenced a four-day Media and Information Literacy (MIL) for the journalists working in the community radio stations, currently underway at the FIFA Goal Project in Yundum.

The training inter alai seeks to help enhance the reporting skills of the targeted journalist, combat and address the issues of hate speech, misinformation, mal-information, as well help to widen their reporting techniques and understanding on freedom of speech.

Mr. Mamadou Edrissa Njie, the Executive Director of the Gambia Youth Innovation Network dubbed GYIN Gambia, said that during the training the participants will be taking through topics such as hate speech, freedom of expression and fact checking, as well as practical steps needed in fact checking.

“The objective is to equip and enhance the works of the community radio journalists, in their journalistic roles and woks, and to also inform their respective communities about the Media and Information Literacy.  This will also enhance the knowledge and understanding of malinformation, misinformation and disinformation,” he told Community Radio Journalists.

This he said will also capacitate the community radio journalists in their radio programing, and is funded UNESCO Dakar through the UN Peace Building Fund.

“We will be here for the next four days, and during these days we will learn a lot on the tools, steps and the information that is needed to address and combat hate speech, as well as in relation to freedom of expression,” GYIN ED told the participants.

Mr. Bakary S Dampha, the PRO of the Network of Community Radio Journalists, said that the training is timey and crucial saying that it has come at a time when the country is gearing up for the forthcoming local government elections.

“The training will help us report with impartiality and releasing or publishing our reports on time. The relationship between the community radio journalists and the people in the communities, is closer then with other journalists, and this training will help to further cement that cordial relationship between us and the people in our various communities,” he said.

While expressing thanks to the organizers such as UNESCO, UN and GYIN, he urged the community radio officials to avert the issue of hate speech in their services both, during and after the upcoming local government elections.

Mr. Lamin Jahateh, the UNESCO Country Program Officer, told the convergence that the UNESCO UN Peace Building Project among others seeks to address the rising phenomenon of hate speech and disinformation.

“Your role is critical and the training will help you to critically analyze your reports, so as to enable you to report on issues with accuracy and will also help to avert the issue of ate speech in your reporting”, he told the participating community radio journalists.

The project he added is a two-year project titled Young Men and Women as Stakeholders in ensuring peaceful democratic processes, and advocate for the prevention of violence and hate speech.

Dr. Wumi Morolake Adekunle, Dean of the UTG School of Journalism and Digital Media, said that the reality in the information has changed, adding that information is presently decentralized with the vast number of the individual within the population, that used to be mass audience, becoming information disseminators.

“The society benefit by carrying everybody along, by ensuring that all the segments of the society are information and media literate, but at the same time the society will not benefit not been able to rightly accept their sources of information, and not having the skills necessary that are necessary, to utilize information in a way that will promote development,” she said.