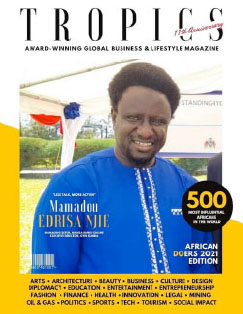 A Gambian youth activist and founder of the Gambian Chapter of Global Youth Innovation Network (GYIN), Mr. Mamadou Edrisa Njie, is among Tropics Magazine’s ‘Top 500 annual power list, thus making a name for himself in the award-winning magazine’s list of ‘influential Africans.’

Tropics Magazine, according to officials, “is an award-winning “Business and Lifestyle” monthly publication catering to a global readership based in Africa, Europe, America, and Southeast Asia including Australia.

“Every month, the TROPICS media brand releases 5 editions per world region which are proudly published by the Tropics Media Group, a division of the Tropics Ventures Group.”

The duo from the small West African nation of The Gambia were recognized among “top prominent personalists, including Presidents, Ambassadors, Musicians, Footballers among others”.

“As the magazine celebrates its 11th anniversary this year, the Tropics Magazine editorial team brings you the biggest list of all time – 500 success stories from thought leaders, business and social elites, and trendsetters and innovators who excel in several fields of activity and whose job it is to mark Africa as a leading investment destination. #African DOers is also a call to action on social media to inspire a new generation of DOers by promoting a positive image of the African continent,” the magazine states.

The Tropics Magazine recognizes the contributions of Africa’s most influential leaders who shape Africa’s image. This annual ranking yet again puts under the spotlight figures of Afro-optimism carrying, each in distinct but complementary fields, the hope of a dynamic Africa and land of creativity.

“I am an African citizen and I live in Africa and love Africa and its peoples,” the GYIN Gambia chief echoed.