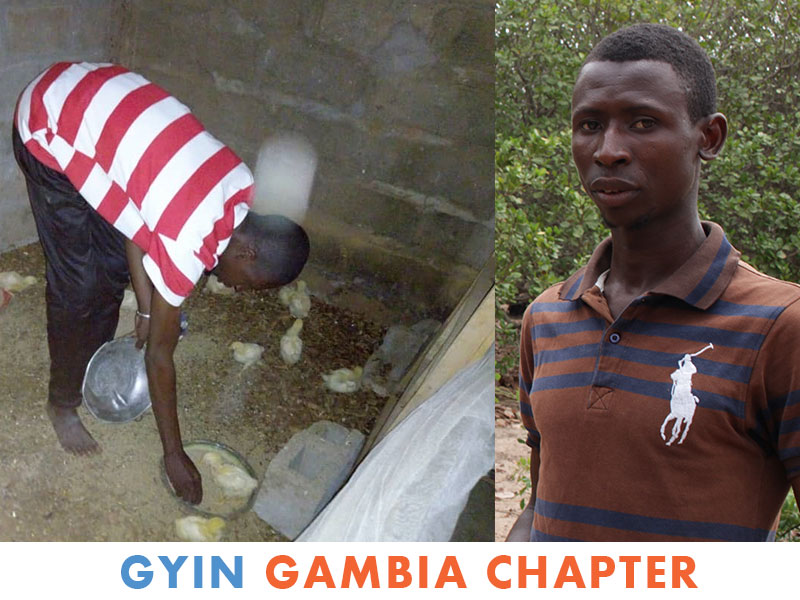 As an uprising young entrepreneur in his native Village, Sanyang was motivated to venture into cashew farming after attending the first edition of GYIN Gambia’s Entrepreneurship Leadership Information and Technology (ELIT) National Youth Summer Camp in 2016, during which he expanded his father’s cashew farm as a fulltime business.

With several efforts vested in the farms, he earns a title of being a champion cashew farmer in his community.
Again, he was inspired by Mr Sang Mendy, the CEO of Faith Poultry, a GYINer, who was invited as Motivational Speaker at the third Annual General Meeting of Bulock Kapongha Youth Development Association, where he is currently serving as the Treasurer, to start poultry production.

He used the proceeds from the cashew nut business to build a poultry house and bought fifty (50) broiler birds, which he started early this month.

Sanyang, who is also an alumni of GYIN Gambia’s pilot Youth Mentorship Program 2017 on Enterprise Management, intends to be the leading and the most reliable egg and chicken producer in his community and beyond.
Stressing out his challenges, he decried the high cost of poultry production which includes feed, medication, feeders as well as drinkers. “Sometimes, I process local feed for myself using smoke fish,” he said.